Gugu Dlamini Foundation was founded by her daughter Mandisa Dlamini. She was the only child to Gugu Dlamini and she was only 12years when her mother was brutally murdered in 1998.

Two years later she was adopted by a family in Pretoria and was given a second chance in life to be raised in a warm loving family, till she furthered her studies in 2009.

She then asked her adopted mother how she can pay her back for everything she has done for her, for raising her to strong young women that she is today. Her mother told her to go back to the same community who killed her mother and look for other young Mandisa’s like her and give them the support and love that she received from this family.

In 2010 Mandisa Dlamini age 24 went back to Ntuzuma B (Kwa- Mancinza) to the same community that murdered  her mother, she first went and looked for the killers of her mother and told them she forgave them for what they did. She then went back to the house where her mother was murdered and turned it to an AIDS museum place were women and girls stigmatised and discriminated can find sense of belonging.

Today Gugu Dlamini foundation is registered as a Non-Profit Organisation (NPO) and currently has a Board comprising 6 members and 20 young women volunteers. 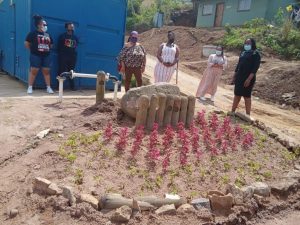 We live in a completely interdependent world, which simply means we cannot escape each other. How we respond to AIDS depends, in part, on whether we understand this interdependence. It is not someone else's problem. This is everybody's problem.